The basis for all our beliefs is the Bible, which is the inspired Word of God.

We believe that God is the Creator of the world. He is a loving God who is sovereign over everything.

We believe that because of our sins and rebellion against God, we live in a fallen world and deserve to be rejected by God.

We believe that God did not turn his back on the world because of our sin, but instead he is working out a plan of salvation that will reconcile us to him.

We believe that we are called to repent of our sins and turn to Jesus. He alone saves us and then calls us to a life of thankfulness to him.

We believe that God calls us to join a local, faithful church where believers can worship God together, and where they will be strengthened through the preaching of God's Word and the sacraments of baptism and Lord's Supper (or communion).

As a Reformed church we hold to the 5 following principles, sometimes referred to as the "5 solas": 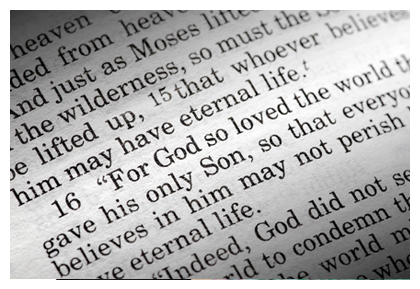 Christian churches throughout the New Testament have expressed their unity together through creeds that summarize the Christian faith.

These creeds are accepted only because they express Biblical truths. Our church stands in unity with believers throughout the New Testament by believing the doctrines found in the Apostle's Creed, Nicene Creed and the Athanasian Creed.

I believe in God the Father almighty,
Creator of heaven and earth.

I believe in Jesus Christ,
His only-begotten Son, our Lord;

He was conceived by the Holy Spirit,
born of the virgin Mary;

suffered under Pontius Pilate,
was crucified, dead, and buried;
He descended into hell.

On the third day He arose from the dead;

He ascended into heaven,
and sits at the right hand
of God the Father almighty;

from there He will come to judge
the living and the dead.

I believe in the Holy Spirit;

I believe a holy catholic Christian church,
the communion of saints;

the forgiveness of sins;

the resurrection of the body;

and the life everlasting. Amen.

We believe in one God, the Father Almighty, Maker of heaven and earth, of all things visible and invisible.

And in one Lord, Jesus Christ, the only-begotten Son of God, begotten of the Father before all ages; God of God, Light of Light, true God of true God; begotten, not made, of one substance with the Father; through whom all things were made.

Who, for us men and our salvation, came down from heaven and became incarnate by the Holy Spirit of the virgin Mary and was made man. He was crucified for us under Pontius Pilate; He suffered and was buried; and the third day He arose, according to the Scriptures, and ascended into heaven, and sits at the right hand of the Father, and He will come again with glory to judge the living and the dead; whose kingdom shall have no end.

And we believe one holy catholic and apostolic church.

We acknowledge one baptism for the forgiveness of sins; and we look forward to the resurrection of the dead, and the life of the world to come.

Whoever desires to be saved must above all things hold to the catholic faith. Unless a man keeps it in its entirety inviolate, he will assuredly perish eternally.

Now this is the catholic faith, that we worship one God in trinity and trinity in unity, without either confusing the persons, or dividing the substance. For the Father's person is one, the Son's another, the Holy Spirit's another; but the Godhead of the Father, the Son, and the Holy Spirit is one, their glory is equal, their majesty is co-eternal.

Thus the Father is God, the Son God, the Holy Spirit God; and yet there are not three Gods, but there is one God. Thus the Father is Lord, the Son Lord, the Holy Spirit Lord; and yet there are not three Lords, but there is one Lord. Because just as we are compelled by Christian truth to acknowledge each person separately to be both God and Lord, so we are forbidden by the catholic religion to speak of three Gods or Lords.

Who, although He is God and man, is nevertheless not two, but one Christ. He is one, however, not by the transformation of His divinity into flesh, but by the taking up of His humanity into God; one certainly not by confusion of substance, but by oneness of person. For just as soul and flesh are one man, so God and man are one Christ.

Who suffered for our salvation, descended to hell, rose from the dead, ascended to heaven, sat down at the Father's right hand, from where He will come to judge the living and the dead; at whose coming all men will rise again with their bodies, and will render an account of their deeds; and those who have done good will go to eternal life, those who have done evil to eternal fire.

This is the catholic faith. Unless a man believes it faithfully and steadfastly, he cannot be saved. Amen.

The doctrinal standards of our church are the Reformed confessions known as the Three Forms of Unity.

These documents date back to the 16th century, and have been used by Reformed churches ever since. If you come from a Presbyterian background, they are similar to the Westminster Confessions.

Our confessions do not add anything to the Word of God. We hold to these confessions only because they are faithful summaries of the core doctrines given to us in the Bible. They are useful to us as tools for teaching and summarizing the doctrines that are important to the Christian faith.

The 3 documents in the Three Forms of Unity are the Belgic Confession, Heidelberg Catechism and the Canons of Dordt.

For an introduction to these confessions we recommend:

Blessings Christian church believes that all members, including infants, should be baptized as a sign of God's covenant promises.

We believe this is taught by Scripture. In the Old Testament God made a covenant with Abraham that was sealed with circumcision. This was more than just an outward sign – it was only given to Abraham "as a seal of the righteousness that he had by faith". On account of his faith, the promise was given to him and his children – a promise that is repeated in the New Testament (Acts 2:39).

We believe that in the New Testament, baptism is also given on account of faith to both the believer and their children. Their children are covenant children who are part of God's church. This is the model taught to us in Acts 16 where we read of two instances where a new believer's entire household was baptized. First Lydia came to faith "and after she was baptized, and her household as well…" (Acts 16:15), and later the Philippian jailer "was baptized at once, he and all his family" (Acts 16:33).

In his time on earth Jesus often reached out to children and we believe he continues to include them in his church: "Let the little children come to me, and do not hinder them, for the kingdom of God belongs to such as these" – Luke 18:16

Infant baptism has been practiced throughout the New Testament. Origin, one of the earliest Christian authors, wrote "The Church has received from the apostles the custom of administering baptism even to infants". While we love and respect our Baptist brethren, we believe the correct interpretation of God's Word is to continue giving the sign of baptism to our infant children.

This does not mean covenant children are guaranteed salvation or that they are any better than others. It does mean, however, that God has laid claim to them and gives covenant parents a responsibility to teach their children the gospel message. As children grow up they must respond with faith and obedience to Jesus. God calls the children of believers to keep his covenant from generation to generation.

The Lord's Supper is a symbol of our unity as member's of Christ's church. Along with baptism, these two sacraments of were instituted by Jesus as a means to strengthen our faith through the visible sacraments. (1 Cor 11:23-25)

The elements of the Lord's Supper are the bread and wine, which are shared by members of the congregation in memory of Jesus's sacrifice for our sins.